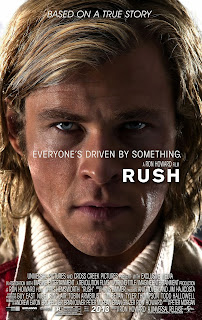 If there has been one consistent criticism of Ron Howard's career as a director, it is that he often plays it too safe.  It's easy to look at his big, clean, classically structured star-vehicles and be cynical about the "art" involved.  I haven't met anyone who really dislikes Howard, but he isn't sitting atop many people's favorite directors lists either.  Ron Howard has traditionally been too mainstream to inspire much passion in any direction.  That may change with his new film Rush, the most audacious movie of Howard's career.

Rush tells the story of two rival Formula 1 race-car drivers from the mid seventies named James Hunt and Nikki Laude.  The narrative is told simultaneously from both perspectives, going so far as to actually featuring voice-over narration from each character.  The focus of the film is on the central antagonistic relationship between the two drivers.  By concentrating on this rivalry the film not only creates it's dramatic tension, but also uses it as a vehicle to explore much more complex ideas.  The movie wants us to reflect on the motivations of the competitors and by extension what drives athletes to greatness.  It examines how other people outside ourselves can push us to, or even define, our successes and failures.  Unfortunately, as a character piece the film falls short.  It is only through the fine performances of it's two leads that the movie doesn't completely fail as any kind of character study.

Hemsworth turns in an admirably vivacious performance as James Hunt.  Hunt is a British F1 driver who likes to drive fast and live life faster.  He is the prototypical playboy race-car driver.  This type of part could easily have edged into caricature, but Hemsworth is able to keep the performance grounded and believable through his considerable charm.  Even though Chris Hemswoth's face is all over the posters and trailers for Rush, don't let that fool you.  This movie truly has dual leads.  Daniel Bruhl, as Hunter's conservative and cerebral rival, Nikki Laude, is the true revelation of this film.


I had not seen Bruhl in anything aside from his supporting role in Inglorious Basterds.  Also, by not coming to the movie as a fan of racing, I had no idea whom Hemsworth was playing.  I had incorrectly assumed he was the hero of the film.  Walking out of the theater though it was obvious that Bruhl's performance as Laude was the one that defined the movie.  Laude was the one character in the film I felt like I completely understood by it's end.  This understanding wasn't defined by screen time or writing, but through the determined performance of Bruhl.  Like a modern day Salieri, even if we don't like Laude we understand him.  His journey is one of manic obsession and control, but it is never bitter.  Towards the end of the film Laude makes some defining decisions that I'm sure will divide audiences.  Some may find his actions inspiring while others may find them disquieting.  I do not think for a moment though that audiences will question if Laude himself would have made the decisions he does, regardless of their own personal feelings.  Unfortunately, the other characters in the film aren't nearly as well developed.  One of the most glaring examples of this phenomenon was the criminally underused Olivia Wilde, playing the part of Hunt's wife.

By my count Wilde had a total of three speaking scenes and two where she is simply shown.  She doesn't play an insignificant role and I would normally be hesitant to recount a character's entire arc, but it is so underdeveloped and simple, I feel that it serves as a context for the failings of the film.  In her first scene we see her meeting Hunt and chatting in a garage, her next scene we see their wedding and the very next time we see her, they are arguing about all their "same old issues".  Aside from one additional scene where they discuss the official dissolution of their marriage, that is the extent of her character.  The hope and eventual failure of this marriage is made out to be a huge defining episode in Hunt's life.  While we may see the course of the marriage in the film, we never understand it.  We don't know the reasons for their marriage breaking apart.  We are left with questions like, "how long were things good, before they went bad?" and "why should we care if the marriage works out or not?".  We don't even have enough information to decide whether we think it was a good match.  The film covers a great amount of the driver's lives, but it feels more like a series highlighted moments than a connected narrative.  Interspersed with these moments though is some truly jaw dropping race footage.  Ron Howard gets the camera in places you have never seen before.  It's just unfortunate that for the first time in Howard's career, it seems like character and story are taking a back seat to visuals.

There is a alot to admire about Howard's film.  It has an unconventional narrative, gorgeous cinematography, winning performances and an interesting subject matter.  The problem is that it just fails to make an emotional connection.  Covering such a huge narrative swath by following two lead characters over years of their lives, led to both the film's greatest success and failure.  By showing both sides of the rivalry we are able to see how outside rivalries can drive competitor's greatest achievements.  By making sure we get every important event covered though it often feels like we were skimming the surface, rather than digging deep into any particular character or moment.  Like a needle skipping on a record, individual moments may satisfy but the entire experience lacks cohesiveness and context.

Ron Howard has created a gorgeous film, that is a fever dream of 1970's racing.  It is beautiful, exciting, loud and feels properly "epic".  In a strange way if I didn't know who made this film, I would say it feels more like  a matured Michael Bay film than one made by Ron Howard.  Rush hurtles forward with energy and stunning photography, but the "story" becomes just a series of moments butting up against one another shown through a glossy prism.  This "greatest hits" aspect of the movie's structure does thankfully wind down a bit in the third act of the film.  It is only then that it feels like we are able to breath, reflect and live in some of these moments.  As a result the movie improves and actually creates some emotional resonance.  It is during this part of the picture that it becomes clear that the movie had the potential to be much more.  It's just unfortunate that the majority of the film couldn't rise to this level and deliver something more than fortune cookie philosophy and fashion commercial depth.