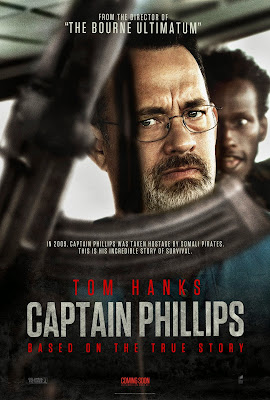 Movies have given me just about every emotion imaginable.  They have made me laugh, think, mourn, inspire, love, cheer out loud and so much more.  Roger Ebert once said that we shouldn't go to films for "intellectual truth" but "emotional truth", because "movies are an emotional medium".  In my decades as a movie-goer I thought movies had made me feel every emotion they possibly could, it turns out I was wrong.  Watching Captain Phillips I experienced something that I had never felt in a film before, never knew I could feel, catharsis.

Captain Phillips tells the true story of an American captain of a civilian cargo ship, that is boarded and hijacked by Somali pirates off the coast of Africa.  It follows a chain of events that begins as benignly as a man getting a ride to the airport, through the hijacking and the eventual violent resolution on the high seas.  That's it, that's the story.  If I were so compelled I could give a detailed rundown of the whole film's plot in less than a paragraph.  But, this film's greatness doesn't lie in the straightforward sequence of events that serves as it's basis.  The film's greatness is derived from the emotional journey director Paul Greengrass takes us on with his film.

Greengrass has shown great talent in the past, most notably with United 93, but he has never made something that approximates the experience this film.  I don't know that anyone has.  By exploiting the immediacy of his docudrama style to it's fullest, we are given first row seats to pure terror.  There has been criticism in the past about Greengrass's use of handheld cameras, but in this instance it only heightens the film.  There is never a moment in Captain Phillips where the action is unclear or we lose track of the geography of a situation.  Even after the US Navy gets involved, every nuance of their strategies are crystal clear to the audience through visuals alone.  If you remember the news stories from 2009, or have seen the trailers for this movie, you were already aware that eventually the US Navy SEAL's show up.  What you can't have known, no matter how much previous background you have on the film, is the impact Greengrass makes in his depiction of these men.


Their presence and methodical precision in this movie is astounding.  This is the film that Zero Dark Thirty wanted to be.  As a member of a military family and an American, I was equally dispirited and proud at just what these professional warriors are capable of.  The most accurate word to describe their representation in this film is awesome.  As an audience member you literally will be in awe of their capability.  But, all the superlatives in the world heaped on Greengrass's direction wouldn't mean anything, if he didn't have the right actors to connect the emotional resonance with the audience.   Luckily, Captain Phillips has some of the best performances of the year.

It may seem at first glance that casting as well known a face as Tom Hanks, in a film that aims for realism, may be a misstep.  But even though the Hollywood icon is in nearly every moment of the film, the movie becomes terrifyingly real in a way few movies ever have.  When we watch a studio film featuring a movie-star we should never fear for his character's safety, it's a given right?  And yet for nearly every moment of Captain Phillips, the mind races at how this couldn't possibly turn out ok.  You are on the edge of your seat fighting your own instincts that keep telling you, this will only end in one possible, horrible and grisly way.  Even though Hanks gives a tour-de-force performance, that smashes you right in the gut, there is a part of you that will always be aware that you are watching Tom Hanks.  Perhaps that is part of the reason why the film is so effective.  Even as he disappears into the role, some part of us never forgets who it is we are watching.  We have that thirty years of affection built in as we watch him go through this terrible ordeal.  So watching him in pain and danger becomes more tangible, like watching a family member we love be forced to suffer.  But, even though Tom Hanks remains "Tom Hanks" the pirates have no such baggage.

As much credit has to be given to Hanks' emotionally raw performance and Paul Greengrass's expert direction, the thing that may stand out the most is the perfect casting and performances of the Somali pirates.  When we look at them we see only threat and reality.  There is no aesthetic distance.  The pirates, especially their leader Muse played by Barkhad Abdi , become real.  The situation becomes real.  And, so the feelings of terror, become real.  I can't remember antagonists in any recent movie that can compare to the animalistic danger that these pirates possess.  Looking into their eyes is like being enclosed with a wild tiger that can violently strike you at any moment.  The danger is always palpable and real.

Don't let me give you the impression that these actors are simply giving us sneering villains, far from it.  Through both dialogue and subtext we get to know these captors.  Even if we can't sympathize with their choices, we perhaps begin to empathize with them.  I have no idea if newcomer Barkhad Abdi will build a long illustrious career from this debut, or if it was a matter of serendipitous casting for a perfect part.  What I do know is that he should receive as many accolades and credit for carrying the film, and making it the experience that it was, as Hanks does.

That is truly what this film is, an experience.  As a grown man who has seen thousands of movies I teared up at the end of this film.  The amazing thing was that it wasn't because of any kind of emotional sentimentality.  It was relief.  It was relief and disbelief that this emotionally wrenching ordeal was over.  This is a movie that will fray your nerves, churn your guts and leave you exhausted and overcome as an audience member.  Captain Phillips is a film that demands to be seen in a theater so that you can have as intimate and expansive an experience with the film as possible, allowing you to truly feel the horror and triumph this film has to offer.  There is no doubt that Captain Phillips is one of the very best movies of the year.