We'll soon be getting even more Sherlock Holmes to add to the recent rash of TV and movies over the last few years, but this time from a rather unexpected source.  Icon films has just announced that they will be financing a brand new Sherlock Holmes film entitled, A Slight Trick of the Mind and starring Ian McKellen. 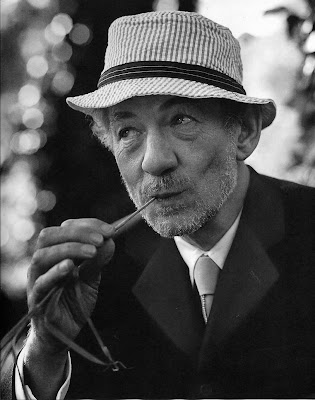 The new film, based on a novel by Mitch Cullin, imagines a retired Holmes whom is drawn back into one last case:


"In 1947, Sherlock Holmes, long retired, lives in a sleepy Sussex village with his housekeeper and her amateur-sleuthing son. But far from living out a peaceful retirement, he is haunted by an unsolved case from fifty years ago. He remembers only fragments: a confrontation with an angry husband, a secret bond with his beautiful but unstable wife.

With his legendary mental powers on the wane, and without his old sidekick Watson, Holmes is faced with the toughest case of his life – a case that might finally reveal to him the mysteries of the human heart."

McKellen will be re-teaming director Bill Condon whom each received Oscar nods on their previous effort together Gods and Monsters.  Their new movie is set to begin filming early next year in the UK.

It seems to me this is a no lose scenario.  Ian McKellen obviously has the air of intelligence and cleverness to play Holmes and if you are looking for an older actor I can't imagine a more natural casting.  Perhaps even more than McKellen, it's Condon's involvement in this project that has me excited.  Bill Condon is an extremely talented film-maker that I always felt was a bit wasted on his musicals and *shudder* Twilight.  Hopefully this will be the beginning of him starting to really flex those character muscles again and living up to his tremendous potential. Now let's just hope the story lives up to their talent!

So what do you guys think?  Is this something to get excited about, or you overloaded on Sherlock Holmes at this point?  Let your voice be heard in the comments below!