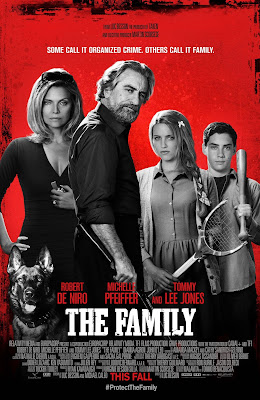 Luc Besson(The Professional, La Femme Nikita) first started dreaming up and writing The Fifth Element when he was barely a teenager.  Even though his new film The Family is an adaption of his co-writer Tonino Benacquista's french novel Malavita(translated to Badfellas), it is easy to imagine this movie springing to life from mind of a young Luc Besson; imagining how American gangsters would act if transplanted to his native France   If The Family is to be taken as any indication, they would make the absolute worst neighbors ever and potentially take out town by the end of the first week.

The film centers around ex-mafioso Giovanni, played by Robert DeNiro(Goodfellas, Heat), who has turned state's evidence and has been in the witness protection program with his wife and two children for years.  The movie opens with the "Blake" family settling into a new home in Normandy, France and watches as they try to integrate into provincial French life and escape their past.  Their attempts at both of these goals are often unsuccessful, extremely violent, or both.  This family finds it almost impossible to not reveal their true nature as a group of complete sociopaths.


This is the aspect of the movie that I'm sure will be most divisive   The tone of the film could best be described as a black comedy or a violent satire of common American and French tropes.  Because of the satiric nature of the movie most of the characters, especially the children, struck me as one-dimensional caricatures as opposed to fully developed individuals with thoughts and feelings guiding their actions.  So, when a recurring source of humor was sudden outbursts of consequence-free, extreme violence, it struck me as a little off-putting; and quite honestly made me uncomfortable on a couple of occasions   My view was not universal though, because there was a substantial amount of laughter from the audience at these same moments in the film.

I believe this comes down to a matter of perspective.  I find arbitrary acts of extreme violence performed for laughs, like it was a Looney Tunes gag with humans more disturbing than a realistic gruesome act performed by a fully formed character where the violence "hurts".  So, if the idea of the beautiful, perky, blonde, all-American girl next door beating a classmate half to death after he touches the strap of her sun dress strikes you as potentially funny, this movie is for you.  If however, it sounds nihilistic and cynical you may want to think twice about buying a ticket. This isn't to say that there isn't anything of note beyond the violence, because there is, and much of it works quite well.

Luc Besson directs the hell out of the film and the finale is pure balls-out mid-ninties Besson and really improved my overall satisfaction with the film.  Tommy Lee Jones as the federal agent tasked with keeping the family out of trouble isn't exerting himself, but he has a nice antagonistic rapport with DeNiro.  Michelle Pfieffer(Batman Returns, Stardust) once again proves that she should have a much more active career than she currently does, by absolutely dominating the screen every time she appears.  The children played by John D'Leo(The Wrestler) and Diana Argon(Glee) are underdeveloped as real characters, but both of their performances are entertaining.  Argon in particular seems like she could have a bright future.  The humor, aside from some of the violence for me, hits much more often than it misses.

The best bits of comedy come some truly clever observational humor and those classic "fish out of water" type jokes.  The butt of the joke is often stereotypes of Americans, French or of the Mafia, but it isn't reinforcing these stereotypes so much as satirizing them. I think that is why some of the characters lacked depth, because they had to serve two masters.  They were simultaneously serving as ciphers for many of the sterotipical jokes but also expected to hold some semblance of emotional connection with the audience for the final act of the film.  Ultimately, the task was too much and as a result some of the impact was lost.  The result is that there numerous enjoyable moments, but the movie doesn't congeal into a wholly satisfying whole.

The Family is a violent dark-satire that some will absolutely love and others will loathe.  If you like a bit of the old ultra-violence with your comedy go with a group of buddies, drink a few beers and you will have a blast.  Or, if the idea of brutality doesn't strike your funny bone wait for the home video release; because there is one joke that takes place in a movie theater that may be painfully obvious, but lands anyway and any fans of cinema will be sure to enjoy.