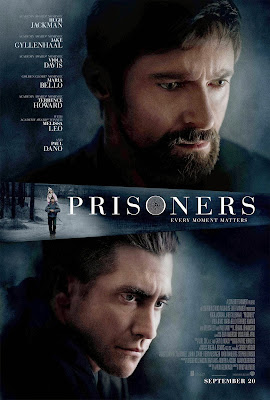 Prisoners is a movie about the pursuit of atonement to fill the aching holes in it's characters lives.  Unfortunately, the film isn't quite as single-minded with it's actions or pursuit of meaning as the characters are.  Everyone in Prisoners is confident and sure-minded in their chosen behaviors, no matter how rash those choices are.  The movie on the other hand seems unsure of what it ultimately wants to be, and as a result is a well-rounded "good" movie.  Jack of all trades, master of none as they say.

Superficially, Prisoners looks like it is hoping to join the likes of Se7en and Gone Baby Gone as high class neonoir.  It has all the set-up you need with abducted young girls, a peculiar stranger in a camper, a troubled cop with a past and a raging self-righteous father.  Take those ingredients and mix them up with a completely stacked cast, add some of the most beautiful cinematography you will see this year, courtesy of Roger Deakins, and you should have the makings of a great movie.  Instead, what you have is a movie that tries to be an examination of societal norms, the concept of sin and forgiveness, as well as a taught procedural thriller; as a result it fails to completely connect on any of these levels.

Prisoners deals with the repercussions of two young girls being abducted from their neighborhood on Thanksgiving day, it's affect on their families and the detective assigned to the case.  Hugh Jackman is strong as Keller Dover, the father of one of the girls.  He is a "born-again" christian and apocalypse "prepper", overflowing with self-righteous and violent fury aimed at everyone but himself.  His wife is played by the always excellent Maria Bello whose solution to the problem is to dive into a bender of prescription pills.  Terrence Howard and Viola Davis do what they can as the other set of parents.  The problem is the roles essentially turn them into a pair of wet blankets.  Some people will argue that they serve as a conscience in the film, but that is far too forgiving of characters whose preferred course of action with difficult moral or ethical decisions is apathy.


If you have seen any of the advertising for this movie you know that the central moral crisis is the capture and treatment of a suspected abductor.  This is the hook of the film that the studio is trying  to sell, "how far would you go in order to save a loved one?"  That is a great question that the film never actually poses or deals with.

Keller Dover is a man obsessed with control over the uncontrollable and the concept of sin.  When Dover abducts and interrogates the suspect, Paul Dano, it isn't because "he can do things others can't" or "he loves his daughter so much", as we might expect.  No, the reason he imprisons Dano's character  is because he, Dover, has to be the one to save his daughter.  He failed in a promise to his wife, that he would protect them from "everything" and so he must personally right the situation.  He literally believes he is the only one that should rescue her.  It isn't enough for him to be forgiven for his perceived transgressions, he must make penance for them as well.  This may sound like the groundwork for an interesting character study but the movie is too concerned with atmosphere, tension and mystery to allow these personalities to breath and be examined in depth with any kind of nuance.  This could be overlooked but the trouble is that the movie under-delivers on the thriller aspect as well.

Hollywood has been making manhunt thrillers since their inception.  We all know what we want from these types of films.  We want good atmosphere, thick tension, an engaging organic mystery, some slight misdirection and an ending that isn't obvious and feels fair.  Nothing is worse than an ending that seems like it was just pulled out of the blue.  Prisoners has fantastic atmosphere.  The look of this film and especially it's handling of weather is amazing.  There are certainly some tense moments spread throughout the movie.  The mystery showed promise with a great set-up and a couple cool twists in the first hour or so.  That goes out the window by about the midway point of the film when we get two pieces of information that let anyone in the audience who has ever watched an episode of Law & Order know the mysteries solution.  The problem is the movie has almost an hour and a half left and the characters won't be able to connect the dots until the final 15 minutes.

The lackluster mystery could be forgiven if the movie dealt with any kind of interesting subtext, alas it has a recurring motif of imprisonment that it handles with all the subtlety of a high schooler's short story.  All the characters in the film are prisoners of one sort or another.  Sometimes this means literal confinement, for others inescapable painful memories or it may just be hopelessness.  Some of these ideas work, you can have an interesting conversation about who is a prisoner, who their captor is and why they are there.  The problem stems from being hit over the head with symbolism.  Jake Gyllenhaal's detective has neck/hand tattoos and personal stylings that would be traditionally associated with a convict, Dover's dead father was a prison guard and on and on, it just feels forced.  When the metaphor become this ham-fisted it is hard to continue to take the rest of it's message seriously.  Don't misunderstand, just because the movie fails to live up to it's own great potential doesn't mean that it is completely without merit.

Prisoners has an amazing look and director Denis Villeneuve brings a nice pacing and wonderful sense of place to the film.  The entire cast is fully committed, and when you realize with the addition of Melissa Leo just how many Oscar nominations they represent, the resume is truly staggering.  The mystery falls flat but the audience is kept engaged until the very end, even if you do occasionally want to yell out instructions at the screen.  The movie should also receive some credit for at least trying to inject a little subtext into a Hollywood thriller.

Prisoners is a movie that wanted to be great.  By trying to be exceptional it ending up biting off more than it could chew.  It's easy to see how an amazing movie could be hiding is in there somewhere.  Instead it's a decent afternoon at the movies. As they keep repeating in the film, "Pray for the best but prepare for the worst".