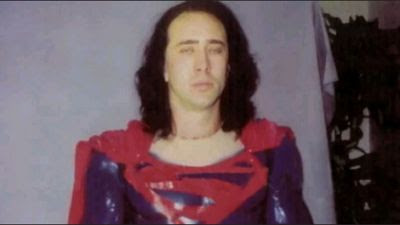 Sometimes one of the great joys of being a movie geek isn’t just talking about movies you’ve seen, but about the movies that never were. Hollywood history is littered with projects that were well on their way towards production and then for one reason or another, never reached that finish line. These almost-films can become the stuff of legend, because they tickle that part of our brain that makes us wonder . . . what if? Whether they were destined for greatness or The Razzies almost doesn't matter as either possibility could be equally interesting. Perhaps no unmade movie in history so perfectly encapsulates that duality as Tim Burton’s Superman Lives.

Superman Lives has become the stuff of legend amongst movie fans with it’s off center casting of Nicholas Cage as Superman, Tim Burton’s odd design choices for the iconic suit and story decisions which would have turned some aspects of the Superman mythos on it’s head. Since the films cancellation the genre film community has wondered just what the movie was and why it never was made. Well, thanks to one industrious film-maker and his successful KickStarter we may finally get some of those answers!
Jon Schnepp the director of Metalocalypse and ABC’s of Death ran a KickStarter to fund his new documentary about this famous missing film. His new movie titled The Death of Superman Lives: What Happened? is set to release next summer and just got it’s first trailer. If you are anything like me this seems like just the kind of movie that can really get the geek blood going.

So check out the brand new trailer and let me know what you guys think. Was this movie on it’s way to classic status or was it an averted disaster? Let your voices be heard in the comments!