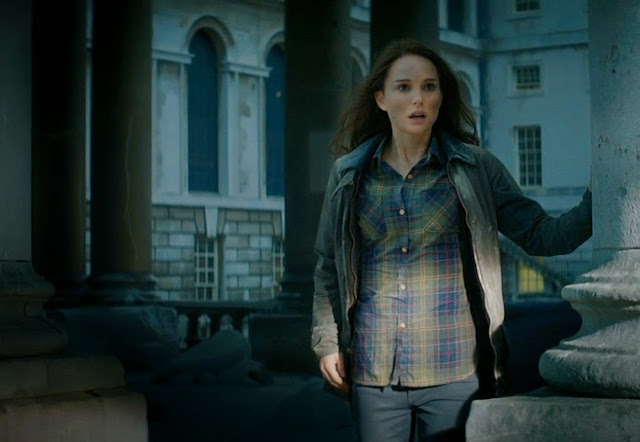 It is sounding more and more like Marvel really wants to move forward with a female-led superhero film.  First there were the quotes from Marvel producer Louis D'Esposito about a possible female lead at some point, then came word that Katee Sackhoff had been contacted, and now Natalie Portman is letting slip that she may know this goes beyond idle chatter.  Listening to her it sounds like it is already in the works.  In a new interview with Sci-Fi Now Portman spoke about her excitement over more diverse leads coming to future Marvel films.

"There are definitely many strong women, but it will be exciting when there is a central female character which I think is coming – I have heard is coming," she said. "And, of course, also a central non-white character will also be exciting. Title characters."


She also makes it clear that that despite the lack of a female leads so far, she does believe that Marvel respects women with their movies.  She cites strong supporting female characters like Peggy Carter, Pepper Potts, Black Widow and of course her own Jane Foster.


"They do definitely have strong female characters in them, and I think it’s a testament to the people who run Marvel - their respect, their just normal human respect for women, the way they want to characterize them. You can tell when men talk to you, as just a person or as a 'woman.'"


Continuing the theme of women at Marvel Studios, Portman does directly address a question about Patty Jenkins.  Jenkins, the director of Monster, was originally tapped to direct Thor: The Dark World.  There were reports of a major falling out over the direction of the film.  Jenkins ended up walking away and she was replaced by Alan Taylor.  At the time it was rumored that Portman was furious at Jenkins' separation, and may have even threatened to leave herself.


“I was very upset because Patty is a wonderful woman," she said. "I was excited to work with her, but I understood why she chose to leave and Alan [Taylor] is really wonderful, so it was bittersweet."


These statements, coupled with the news last week of an Agent Carter TV show, seems to reaffirm that the Marvel universe will be getting more diverse sooner rather than later.  The question at this point seems to be who will these new characters be?

There have been rumors of Ms Marvel, but could it be someone else?  She-Hulk or Spider-Woman?  Is it possible we could get a stand-alone Black Widow, Scarlet Witch or Wasp movie?  That "non-white character" almost has to be Black Panther right?  I know I am excited about the possibilities!

What do you guys think?  Who would you like to see in these movies?  Do you think there needs to more diversity behind the camera as well?  Let your voices be heard in the comments below!