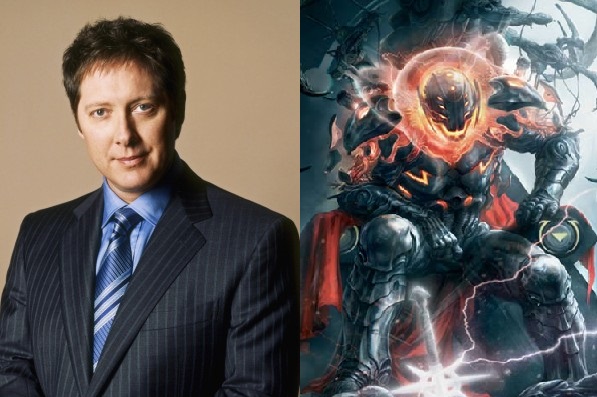 Avengers: Age of Ultron is one of the most eagerly anticipated films scheduled over the next few years and the biggest news that has been reported so far, aside from the title, is the casting of James Spader as the titular antagonist.  As an almost inverse of the Ben Affleck as Batman casting news, the reception has been almost universally positive.  Now, in an interview with Marvel's The Watcher show writer/director Joss Whedon is opening up for the first time about his reasoning for Spader's casting.

"Spader was my first and only choice. He’s got that hypnotic voice that can be eerily calm and compelling, but he’s also very human and humorous. Ultron is not Hal. Spader can play all of the levels. He’s the guy to break The Avengers into pieces. Muwahaha."

I can find no fault with Whedon's logic on this, and was actually elated when I heard the news.  I can't imagine someone whom could better fill the role.  That isn't to say there aren't still questions about Ultron though.

We still don't know if Spader will exclusively  be doing voice-over work, or if he will also be performing a motion capture performance.  Most troubling to me though is just what Ultron's origins will look like.  As a long time comic fan it is hard for me to imagine Ultron without Hank Pym.  I am not thrilled with the idea that Ultron will probably be a creation of Tony Stark, especially after the disappointment that was Iron Man 3.  I will just have to hope Whedon knows what he is doing.

I want to know what you guys think.  Do you think that Spader's casting is as perfect as I do?  What do you think Ultron's origin will look like?  Let your voice be heard and leave your comments below!