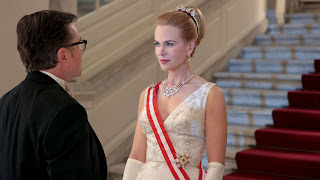 Olivier Dahan gave us one of the best female-centered biopics of the last ten years when he directed La Vie en Rose.  So, the idea of him bringing us a film about Hollywood actress-turned-princess Grace Kelly is intriguing.  Grace of Monaco, starring Nicole Kidman as the titular Grace, takes place in the early 1960's during her marriage to Monaco’s Prince Rainier III, while a political dispute brews between the principality and France.  Tim Roth plays Prince Rainier with Frank Langella, Derek Jacobi, Paz Vega, Parker Posey and Milo Ventimiglia filling out the cast.  Despite these formidable credentials though, I am still very much in a wait and see mode on this film.

The movie's first trailer which just hit, really isn't doing much for me.  It just looks bland and contrived.  Also, I am still far from being sold on Nicole Kidman as Grace Kelly; there is an aloofness or snobbishness that Kidman can exude that I never associate with Grace Kelly, despite her being an "icy blonde".  Trailers can be misleading, so we will have to hope for the best when it is released by The Weinstein Co on November 27.

What do you guys think?  Does this look like something special  or something dull?  How do you feel about Kidman being cast as Kelly?  Who would you suggest instead?  Let your voices be heard in the comments below!