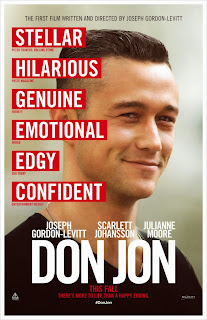 Joseph Gordon-Levitt's Don Jon is a movie that I fear will be successful for all the wrong reasons.  If you look at the marketing campaign, this is a movie being sold as a sex comedy.  Even though there is a great deal of effective humor and a whole lotta sex, this is a movie with much more on it's mind.  Folks may focus on the superficial of this film; like the visual gags, the in your face sexuality and of course the "Jersey" trappings.  Don't be surprised when you hear lots of "Jersey Shore" jokes being made about this film.  Just because a movie may seem to be about superficial characters, doesn't mean that the movie itself is content to survive in that obvious zone.


For a film coming from a first time feature director, Don Jon is a surprisingly cinematic film.  Filled with clever musical cues, smash cuts, focused lighting and thoughtful camera angles, this is a movie that truly tells it's story in a visual way.  The movie is not the "filmed play" you may expect from an actor moving behind the camera.  Levitt allows us to understand and see into the mind of Jon more honestly than Jon sees himself, even though he is our constant companion in voice-over.  It is important that this connection with the audience is made because we must be more clearly aware of Jon's true desires than even he is, or the film would lose it's impact.

Joseph Gordon-Levitt's confident film can easily be seen as the spiritual successor to Saturday Night Fever.  Like that seminal film, Don Jon is a movie about a young man trying to create satisfaction and transient success over his blue collar existence, with what many would consider "shallow" pursuits.  If you bring up Saturday Night Fever to most people they will remember the disco, the leisure suits and Tony's obsession with his hair.  While all of these things inform Tony's character, it is important to remember this is a movie that dealt with themes as serious as rape, abortion. racism and faith.  You don't become Gene Siskel's favorite film of all time on the back of a single memorable and parodyable dance scene.  I worry that Don Jon may suffer a similar fate, with people associating it solely with porn, weight-lifting and anonymous sex with club girls.  That would be an injustice because this movie is actually a deconstruction of modern american values and an examination of love as it is experienced, and presented, to young people in the 21st century.

The cast is filled out with true stars like Scarlett Johansson, Joseph Gordon-Levitt and Julianne Moore.  Unsurprisingly, they all turn in solid performances.  The one who will make you grin when he shows up on screen is Tony Danza.  I don't know where he has been hiding all these years, but this is a role he was seemingly born to play.  Danza's persona reinforces his performance as Jon Sr, instead of fighting against it.  Don't be surprised if Danza starts getting more work after this.

Don Jon is the kind of unexpected surprise that makes going to movies such a treat.  Countless coming of age films are about the right guy falling in love with the right girl.  It is a refreshing new take to see a movie about guy who comes of age by reassessing who the right girl is.  This is a movie about changing your value structure and finding the true worth in others and the world.  It never comes off as maudlin or unearned in it's earnestness, but actually hides it under a smooth veneer of gelled hair, muscle tees and porn.  It will be interesting to see if the film ends up resonating with the public or if they laugh it off.  There are a whole bunch of Jons out there after all.