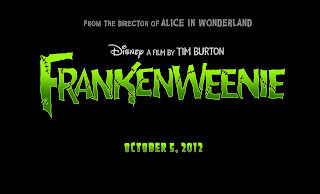 I have been really pessimistic about Tim Burton for the last decade or so.  His recent movies don't seem to be original visions anymore so-much as just the application of a certain brand and aesthetic to as many pre-existing properties as possible.  That is a huge disappointment coming from a director who brought us three near perfect films(Beatlejuice, Edward Scissorhands and Ed Wood).  It would be really easy to roll our eyes at the fact that he is now remaking his own short-film Frankenweenie, as a stop-motion feature, as the ultimate in creative bankruptcy.  Maybe we shouldn't be so quite to condemn on this project though.

I am really digging everything we have seen from this movie so far.  Whether it was the Frankenweenie poster or now this movie trailer; Frankenweenie is starting to look like a movie worth paying attention too.  I love that the film is black and white and the mood from this preview instantly takes me back to the original film.  I can't believe I'm saying this, but Frankenweenie looks good!  Who knows, maybe the Tim Burton we used to love will rise from the grave.

Watch the trailer and let me know what you think.  Am I off my rocker?  Is this just more disposable crap from Burton?  Do you think Burton never lost it and I'm full of it?  Is Frankenweenie a movie you are looking forward to?  Leave a comment below!