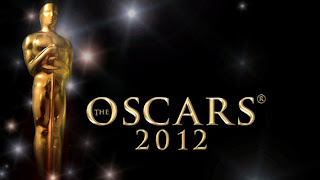 The 84th Academy Awards will be held this coming Sunday night, February 26th. Each day I will reveal my predictions for multiple awards with a culmination on Friday with a complete listing of all Oscar predictions and a complete breakdown of the Oscar race on a special Academy Awards edition of Nickel-Eye NewsCast! So lets get to the first picks of the week!

Should Win: What is interesting about this year's crop of Best Costume Design nominees, is that aside from a few costumes for Hugo, there is very little fantasy or imagination on display. All these films certainly have beautiful and well designed costumes, but for the most part their success is a result of capturing a specific time period rather than giving us something exciting and new. For that reason, I would root for Hugo since it had the greatest sense of theatricality and magic.

Will Win: I am usually dead wrong on this category, but I would be shocked if Jane Erye, Anonymous or W.E. were to win this category. They have costumes to be proud of, but the films have little awards momentum and the costumes simply weren't memorable enough. Hugo has a good chance and deserves the win, but ultimately I think The Artist will add to it's haul by taking home the award for the film's costumes ability to bring old Hollywood glamour back to life!

Should Win: This is an extremely tough catagory this year, it is just stacked from top to bottom without a weak caninidate in there. But for me, there were two scores that did stand out a bit more this year; War Horse and The Artist. It's not that they necessarily served the films any better in context, it was simply a matter of me humming their tunes long after walking out of the theater. From that perspective, I would have to give the edge to John Williams triumphant score.

Will Win: While best score is a tough category to choose your favorite from, I believe it will be a much simpler task to predict the winner. Alberto Iglesias' soundtrack for Tinker Tailor Soldier Spy may compliment the film perfectly but the score is simply too subtle and his name doesn't carry the cache of some of the other composers. Howard Shore won't win because as pleasant as his work for Hugo is, it doesn't challenge his epic Lord Of The Rings work. That leaves Ludovic Bource from The Artist and John Williams with two separate scores. Williams will split the vote against himself and has a whole shelf of Oscars(5) that in many respects disqualifies him in many voter's eyes. No, the Academy will rightly give The Artist's music credit for doing so much of the storytelling's heavy lifting of the film. There is no way Ludovic Bource doesn't win this award.

Should Win: While all of these films had lovely sets & designs, and they certainly deserved the honor of being nominated, this one isn't even a contest. What Dante Ferretti did for Hugo is awe inspiring. Whether it is the grandeur of the train station, the mysterious clockwork of the clock tower or the pure imagination of the George Melies' film sets, there was not an aspect of this film's production design that wasn't capable of both igniting emotion and or inspiring awe.

Will Win: Did you not read the previous paragraph? All of these films did a magnificent job, and in any other year may very well win. This is not any other year though. Hugo is a buzz-saw in this a category and I don't see anything that can stand in it's path.

Should Win: Wow, just look at those nominations up there! Talk about a murderers' row of a category. All heavyweight talents displaying different skill sets, how do you differentiate? For me I would ironically take two of my favorite film-makers off of the top before even beginning. Martin Scorsese and Woody Allen both made amazing films but I don't feel like I learned anything new about their talent. They have given us such a sea of brilliant film-making over the years, they are simply held to a higher standard than any other directors. That leaves Michel Hazanavicius, Terrance Malick and Alexander Payne for consideration. Malick falls a bit into that Allen, & Scorsese category for me, despite my desire to root for him. TerranceMalick has never won a directing Oscar, and certainly deserves one at some point. Unfortunately, I don't think Tree of Life is the film to sum up the brilliance of the man. That means if I had a vote, I would be choosing between Payne and Hazanavicius. While both made singularly amazing films I can only choose one . . . and I would have to go with Alexander Payne. We have known for awhile that Payne can make thoughtful films, but I was shocked and how much emotion and heart he was able to give The Descendants. His style has always seemed a bit aloof and cold to me, The Descendants couldn't be further from those characterizations. So, as much as I respect what Hazanavicus created with The Artist, the growth of Payne as a film-maker simply must be recognized.
PS If you have any lingering doubts about Payne's talent as a director he got a good performance out of Matthew Lillard . . . yeah, just let that one sink in for a minute!

Will Win: Similar to John Williams in best score Allen and Scorsese are going to be competing against their own past efforts and will be instantly disqualified. As much as I personally want to root for Terrance Malick his film is simply too unapproachable for many viewers. Malick has no chance of getting the votes he would need for a win. This once again leaves us with Payne and Hazanavicius. While I would cast my lot with the nuanced skills of Payne, ultimately the Academy is going to reward the brand new exciting voice exploding onto the scene with his cinematic thesis. The Artist is the most clear example of how a great director can literally shape a film this year, and he will be rewarded accordingly.

Sound off below with your thoughts on these categories. Am I right on the nose or way off? Leave a comment below and make sure you look for more Academy Award predictions as the week moves forward!