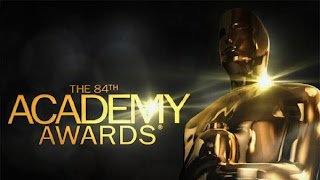 The 84th Academy Awards will be held this coming Sunday night, February 26th. Each day I will reveal my predictions for multiple awards with a culmination on Friday with a complete listing of all Oscar predictions and a complete breakdown of the Oscar race on a special Academy Awards edition of Nickel-Eye NewsCast! If you missed yesterday's picks you can find them here.  Let's get to today's predictions!

Should Win:  My first instinct is to throw my support behind Moneyball for taking elements as disparate as old news footage, spreadsheets, actors in separate locations, text written directly on the screen and making it both understandable and emotional.  The work done on Moneyball is something to truly be applauded.  The Descendants and that is where I have to give my endorsement though.  When discussing The Descendants it isn't so much about where the cuts are, but where they aren't.  With a lesser hands guiding the flow of this film it could have easily become TV in nature, but it doesn't.  Shots are held longer in this move than they often would be, sometimes uncomfortably so.  Not only are the performances often allowed to breathe, but an air of awkwardsness and tension is often given to a scene.  It's not something we often see in film editing and thats why Kevin Tent deserves the Oscar for his work on The Descendants.

Will Win:  I am going to be rooting for The Descendants to win on Sunday night, but I don't think they will get the prize.  I think the techniques which are utilized in the film are just too subtle and don't scream "look at me".  I also don't think Hugo and The Girl with the Dragon Tattoo have much of a chance.  There just wasn't enough there for the voters to grab ahold of, and Schoonmaker already has three of these awards.  That leaves Moneyball and The Artist as our two possible winners.  The case for both films is fairly strong.  Moneyball has the showier job of taking disparate elements and helping an audience understand them.  The Artist on the other could be given credit for helping shape the film in a way that the audience remains engaged through images alone, without the aid of sound.  If The Artist wins it will probably mean The Artist is in for a big night, but I think it will be edged out.  Ultimately the technical prowess of Moneyball will win the day and earn The Academy Award.

Should Win:  Nothing against any of the other nominees in the category, but Hugo deserves this award hands down.  While War Horse is an homage to war films past and present, The Girl with the Dragon Tattoo has sense of sharp coldness and The Artist brings the beauty of black and white film back to the masses, they simply can't compete with Hugo.  Even The Tree of Life, with it's soft images of a childhood long past and barely remembered, doesn't deserve the award.  What Hugo does is combine a world of bright vibrancy, wonder, imagination and the nostalgia of a past that never existed to create a world that could only live in our wildest dreams or on a movie screen.  The images of Hugo are literally the stuff dreams are made of, and demand to be awarded.

Will Win:  This is an award that could very well be decided by the momentum of the evening.  I don't think that Tree of Life and The Girl with the Dragon Tattoo have very realistic shots with their lack of awards momentum.  Of the remaining films, I view Hugo and War Horse to be most worthy of the win.  I think War Horse may be too classical in it's style for some voters though.  The Artist could steal this category if it starts to sweep the night, but I just don't think that it will be enough in the end.  Hugo will take home the prize.

Should Win:  Visual Effect is always a fun category because everyone understands what the award is for and this category often has many of the big summer blockbuster's that rarely get nominated in the other categories.  The nominees this year also offer a bit of anything you could want from visual effects; from giant robots in Real Steel & Transformers, magical battles in Harry Potter, a painterly story book Paris brought to life or animals that can think and feel in Planet of the Apes.  The one that stood out from the pack and deserves special recognition is Rise of the Planet of the Apes.  The other films were impressive, but what Planet of the Apes will be graded on a curve.  Perhaps the most difficult thing to do in all of special effects is to create a believable organic character and I feel Planet of the Apes did that as well or better than it has ever been done before.  That is why Rise of the Planet of the Apes deserves an Oscar.

Will Win:  Projecting the winner for this category could be very tricky.  Real Steel could be a dark horse because the robot work was so convincing that it was sometimes difficult to tell when you were seeing CGI or a practical model on screen, but the film wasn't breaking new ground.  Then you have Transformers and the destruction of Chicago is hard to ignore, but it feels like we've seen it before.  One of my personal favorites is Hugo, but the fantasy style mixed with beautiful real world sets often makes you forget you are seeing an effect(which is great for the movie, but not so much for an award).  That means that the Academy Award will go to either Harry Potter or Planet of the Apes.  While I don't think it's much of a contest as to which film's effects were more impressive I have a nagging feeling that Oscar voters will want to honor the end of the Harry Potter franchise with some recognition.  Harry Potter and the Deathly Hallows Part 2 is going to steal the award.

Should Win:  This category is tough for me to be honest about.  I absolutely adore Aaron Sorkin and root for him in any context. . . but Moneyball was just not the best Adapted Screenplay of the year.  I would also like to give props to The Descendants and Hugo for taking books and turning them into such purely cinematic experiences that it is difficult for me to imagine them in any other context.  But if I am going to be honest about who did the best job of adapting a book to a script, the award deserves to go to Tinker Tailor Soldier Spy.  The way they were able to juggle multiple time periods, locations, names, code names, spy jargon, numerous characters, a period setting & flashback and not only make it comprehensible but tense, exciting and engaging.  They truly deserve recognition by the Academy.

Will Win:  Aside from a small chance that The Descendants may slip in there as a way to honor the movie as a whole, this award belongs to Tinker Tailor Soldier Spy.  I was able to appreciate the amazing work that was done on the script and I was in not familiar with the source material.  Those that have read the book were reportedly shocked at how they were able to take a huge novel and condense it into an effective two hour form, when the BBC struggled to fit it into a seven hour mini-series.  I don't see how that work doesn't win.


So what do you think of these categories?  Do you disagree with any of my picks?  Or, maybe you feel there were some snubs?  Make sure to leave a comment and let your voice be heard!