Jonah Hill Ready For More Drama With Pitt And Franco 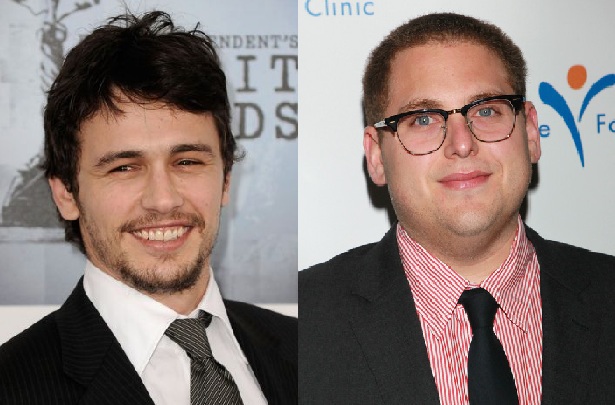 It looks like after his best supporting actor nomination Sunday night, Jonah Hill can't wait to get back into dramatic roles. Deadline just reported that he is going to be teaming with James Franco in a Brad Pitt produced drama based on the book True Story: Murder, Memoir, Mea Culpa

The movie will tell the real life story of a journalist from the New York Times Magazine named Michael Finkel(Jonah Hill).  In 2002 a man from the FBI's Ten Most Wanted List named Christian Longo(James Franco) was hiding out in Mexico using Finkel's name.  This ended up costing Finkel his job, but when Longo was finally apprehended Longo told authorities that he would only speak to Finkel.  Longo saw this as a means to prove his innocences and Finkel saw it as a way to clear his sullied reputation.

If you would have told me 6 months ago that Jonah Hill would be co-starring in a drama with James Franco, I would have thought this had train-wreck written all over it.  What a difference a couple of movies can make.  Moneyball showed that Hill has the potential to be as serious an actor as anyone else.  I would even argue that after his contolled performance in Moneyball he could see a carrer arc similar to that of Woody Harrelson is he so chose.  Obviously, he impressed Pitt as well, since they are already working together again on this new project.

I for one see this as a very encouraging sign.  After Punch Drunk Love it looked like Adam Sandler could become any type of actor he wanted to be, unfortuantely he never approached that level again(even hit an all time low this weekend with a record number of Razzie Awards).  So, even though 21 Jump Street will be Hill's next film, it looks like we don't have to worry about completely losing another taleneted actor to the dung heap of big budget Hollywood comedies for the rest of his career.

What do you guys think?  Would you prefer Hill stick with only comedy or drama?  Or do you think it would be best if he can maintain a balance?  Leave a comment and let yourself be heard!