Over on  Facebook Disney has released the first poster for Tim Burton's upcoming stop motion film, Frankenweenie.  The movie, which opens on October 5th, is a full length stop motion adaptation of Burton's own 1984 short film.  Tim Burton rose to the attention of Hollywood on the back of his original film, which told the story of a boy named Victor who uses some very Frankensteinian methods to bring his beloved dog Sparky back to life.  For those of a certain age, they will remember the film from the countless times it aired on The Disney Channel, for anyone else it is definitely worth checking out.

Now I am usually at the front of the line to decry Tim Burton's recent work, and what I view as his decline, but I have no issue with him re-making his own film.  Maybe working on something he was passionate about in his younger days, some 30 yrs ago, will get those creative juices flowing again.  Then again if he does just let us all down again, at least he is only sullying his own property and not somebody else's legacy.  Either way, it is a gorgeous poster! 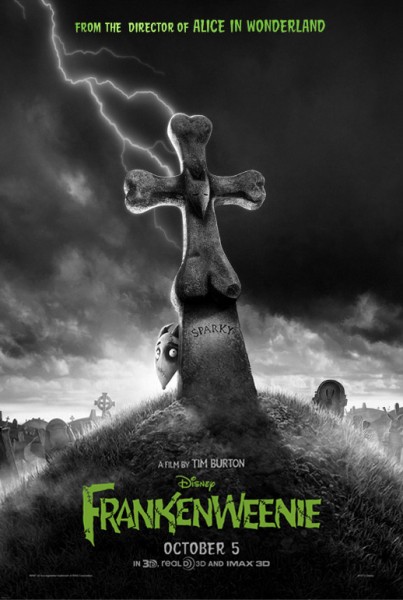 I want to know what you guys think.  Am you looking forward to this remake of Burton's own work?  Or, is he going to have to prove himself to regain your trust?  Sound off in the comments below!