Michael Fassbender the fantastic actor from X-Men First Class and Shame looks like he is going to be putting his quickly rising fame to good use.  According to Variety, Fassbender is developing a film adaptation of the mythic Irish hero Cu Chulainn.  His production company with fellow Irishman Ronan Bennett, Finn McCool Films, is currently raising funds for the project.  Both Fassbender and Bennett are attached directly to the project, with Bennett(screenwriter of Public Enemies) handling the script and Fassbender playing the titular role of Cu Chulainn. 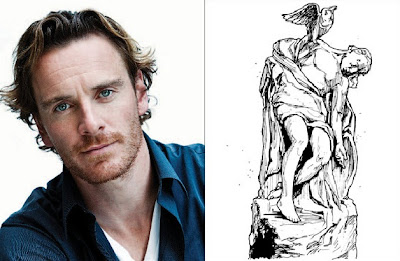 Now, if you are wondering why you should be getting excited at the mere possibility of this project, let me educate you.  In a land known for it's fearsome warriors and the ability to spin a yarn, Cu Chulain is the greatest warrior and one the greatest tales Ireland has ever produced; he got his name by killing a killing a fearsome guard dog as a child, he once defeated an entire army by himself in a battle lasting months where the casualties grew so high the bodies began to form walls and of course when he finally did die, through manipulation, he tied himself to a standing stone so that he may die on his feet.  I don't know how familiar most are with his story.  Take it from me though, as a child of a good Irish woman who raised me steeped in the culture on Ireland, Cu Chulain is a very bad mofo!  Hell I have a small statue of him strapped to that stone right alongside my Darth Vader statue, Captain America replica helmet and Pinocchio  marionette.  Yeah, he's in THAT company!  So get excited and cross your fingers and toes that this project doesn't fall apart.


So let me know how pumped you are in the comments below.  And, how cool can Fassbender get?  The guy has worked with Tarrantino, was in a Fable video game, played a Nazi hunting Magneto, had his genitalia complimented by George Clooney on a live broadcast at the Golden Globes, was one of the biggest snubs for this year's Oscars, is going to be in a sorta Aliens film and will now be playing Cu Chulain in a movie?  He sounds like a cross between Chuck Norris and The Most Interesting Man In The World at this point!  Anyway, like I said leave me a comment below.