Hot Stories
Loading...
Home Akiva Goldsman Arash Amel Coming Attractions Coming Soon Francis Lawrence I Am Legend Movies Rumors Will Smith A Deal Is Made For I Am Legend Follow-up

A Deal Is Made For I Am Legend Follow-up 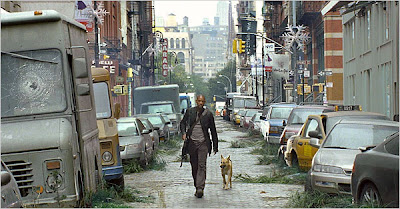 In some news that makes little or no sense artistically, but makes a whole heap of sense financially, Deadline is reporting that Warner Brothers have put together a deal for a second I Am Legend film.  The agreement with Akiva Goldsman(who wrote the first film) and Overbrook Entertainment is to produce the film with Arash Amel attached to write the screenplay.  According to sources Will Smith won't become attached until he reads and approves of the final screenplay.  Much hazier would be the return of director Francis Lawrence(Water For Elephants).  Lawrence's return would seem doubtful though considering what he said last year in an interview.


That was the real reason I wanted to do the movie in the first place, really, was the idea of ‘What does that world look like, what does it do to you when you’re by yourself? … What does it do without people, without companionship and sound and the loss of your family, without anybody to talk to? I think that’s really what people connected to, and so the tough thing is, how do we do that again and in a different way?


Which really is the fundemental question isn't it, what purpose would a second film serve?  Warner Brothers claims that the film is not a prequel, so if you make a second film and you want Smith to once again reprise the role of Robert Neville, doesn't that by definition become a sequel?  The problem is not only would a second film be redundant, but Neville died at the end of the end of the theatrical release of the movie.  Their only out would seem to be if the second film were to pick up where the alternate cut from the DVD release ended, since that cut saw Neville survive the film.  That would obviously be an unorthodox approach to say the least.


I am always all for big budget post-apocalyptic films and I have to say that I feel I Am Legend is a much stronger film than it is given credit for.  In fact, I would argue that the alternate cut of the movie fixes nearly all of the problems of the film, unless you were simply looking for a complete visualization of the Robert Matheson novel.  All that being said, I simply can't get excited for this movie.  Unless I hear some very compelling reasons that they decided to return to this franchise, other than the half billion box office of the first movie, my enthusiasm will be luke-warm at best.


Let me know what you guys think.  Am I being to harsh on the possibility of an I Am Legend follow-up?  Or, is this nothing more than a cynical cash grab?  Sound off in the comments below!