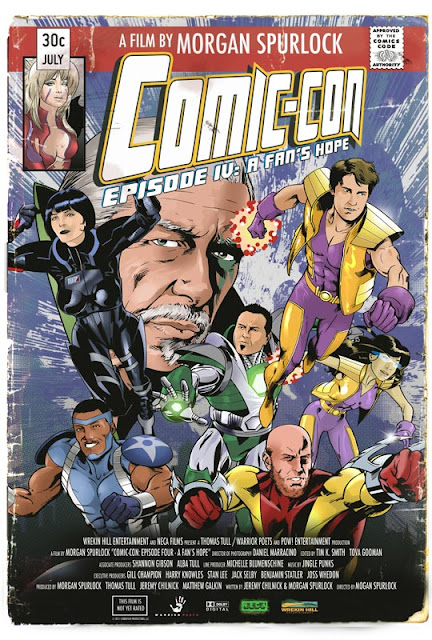 I am a Geek.  I have no problem admitting that I have a deep love for science-fiction and fantasy, I stand in line for midnight screenings and yes I even read comic books.  I am not however, that special breed of Geekdom that allows their interests to dominate and define their lives.  In fact, despite my shared interests, I find this subculture incredibly fascinating and cannot get enough of movies that examine people with these unorthodox passions and obsessions.  Whether it is Darkon, Monster Camp or Trekkies I love these kind's of films.

Today sees the premiere of the trailer and poster for Comic-Con Episode IV: A Fan's Hope.  This may be the biggest budget and most polished movie on a subject like this ever made.  The movie is directed by Morgan Spurlock.  I am not a big fan of his because I feel his films are often agenda driven and manipulative rather than the honest investigations he purports them to be.  In spite of that, I really like what I see from this trailer.  The movie doesn't look like it wants to mock those with unconventional passions, but celebrate them.  I really appreciate what appears to be a focus on fans using Comic-Con can be as a stepping stone to their real world goals, rather than just a place to revel in fantasy excess.  When a movie has Stan Lee, Kevin Smith and Joss Whedon on board it will certainly have more than enough geek street cred to get noticed.  Now let's just hope the movie can live up to the promise of this trailer.


I want to know what you think.  Sound off and tell me what you would like to see in this film.  Is this something you are interested in?  Do you think this film could have any crossover appeal to the public at large?  Leave a comment below!