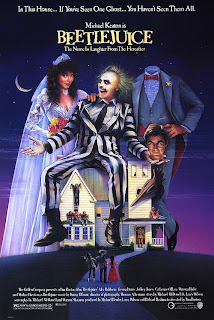 It looks appears the likelihood of a Beetlejuice sequel is increasing by the day. ShockTillYouDrop interviewed Seth Grahame-Smith, the writer of Abraham Lincoln Vampire Hunter and the upcoming Tim Burton directed Dark Shadows.  Grahame-Smith not only acknowledged he is working on the project, but the studio is taking it so seriously he has already sat down with Michael Keaton to discuss the project.

"I met with Michael Keaton last week, we talked for a couple of hours and talked about big picture stuff.  It's a priority for Warner Bros.  It's a priority for Tim.  Right now, I am writing an animated movie for Tim based on an idea of mine.  Then I adapt Unholy Night [based on the upcoming book].  The third I am hoping is Beetlejuice in terms of writing schedule."

He also wants to reassure all of us fan boys out here that it will be a worthy and faithful follow-up.  He goes out of his way to mention his love for the original source material. Of course whenever anyone is making a film based on an existing property they pay lip service to this fact.  Whether it ends up being truth or not it is nice to hear it said.

I don't know about you guys but this is the one Tim Burton project that I am genuinely excited about. It's been a long time since I've been able to say that about anything that Tim Burton has done.  It's not just Burton that gives me faith though, the fact that Keaton is on board and seems pumped is huge!

"He's(Keaton) been wanting to do it for 20 years and he'll talk to anybody about it who will listen. "

With Burton pushing it forward, WB giving it alot of support and Keaton being so enthusiastic about the project really gives us all a ton to be optimistic about.  If they can make a Beetlejuice movie that is half as smart and unique of a film as the original we are all in store for a treat.  And, if we don't then I guess it will be time to officially state that Tim Burton is over the hill artistically.  Either way it should be fun to watch!

Let me know what you think of a Beetlejuice sequel.  Does the possibility fill you with excitement or dread?  Leave a comment below!