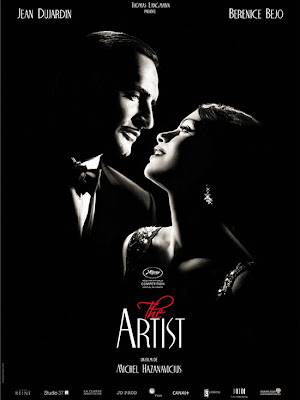 The Artist a black and white silent film and is one of the very best movies of the year.  The movie is brilliantly directed by Michel Hazanavicius, has hilarious comedy beats, beautiful photography & production design and easily the most charming performance by a dog we've seen in years.  Telling the story of a silent movie star who struggles when movies transition into "talkies",  the cast from top to bottom is fantastic.    Of significant note is the performance of Jean Dujardin.  His performance as the titular star of The Artist, George Valentin, is filled with big broad strokes of emotion, nuanced moments of truth and a physical grace not often seen at the movies.  The true greatness of The Artist doesn't reside in these factors.  No, the reason The Artist is one of the best movies of the year is because, despite it's classical style, it is a thoroughly modern film speaking directly to us the audience.

Movies like literature, or any art form for that matter, depend upon the audience and context to have meaning or message.  A work of art is not truly complete until it has an audience reaction.  They bring with them their prejudices, hopes, fears and experiences.  By relating the piece to their life; insight is brought both to and from the artwork.  This is a long way of saying that movies don't exist in a bubble.  Depending on where we are as people, or even a society,can dictate the importance and impact of a given film.  Sure movies are timeless, but they also mean different things to different generations.  Movies that were seen as cutting edge and exciting in their time, may be viewed now as quaint or relics from a time gone by that we can no longer relate with.  Unfortunately, what often happens is that we take these films for granted and believe that they have nothing to offer our modern world aside than nostalgia or a history lesson. The Artist is a film that lets us know the that not only do these movies still have something to offer us, but that they can sometimes be uniquely positioned to change our perceptions of our own lives today. The Artist is a silent film set in the 30's that has alot to say about the modern world.

Many people are going to rightly point out that the artist is a love letter to an era gone by. They're going to talk about how we no longer make black-and-white films(Hollywood certainly doesn't) they may also note
that silent films have gone the way of the dodo bird and thus assume using this style is simply a wink of cleverness.  The Artist is not just an homage to those films, but uses their style to deliver a message to it's modern audience. Today's movies often have characters standing around telling us the plot through paragraphs and paragraphs of dialogue to the point that they border on radio plays. With the silent movie the story is told through visuals alone.  It is up to the audience to fill in the blanks and consider a pictures aim and meaning.  The artist doesn't shy away from this point.  In fact, The Artist understands and revels in this fresh realm and becomes exciting to modern audiences.  It seems a revelation to many audiences that we can understand what's going on and enjoy the story, even though nobody's talking.

It's not just about the visual storytelling that becomes important to the modern audience, but embracing days gone by.  This isn't just a nod to the past but as an all out celebration of those things we have left behind, including a lack of irony.  The Artist is a modern movie that is almost shocking in it's lack of the cynical. So often modern movies feel the need to have everyone be cool, characters are so self-aware that any pure and genuine emotion is seen as lame and un-hip.  The thing that  the irony in modern movies often misses is that when you are experiencing life it is never ironic or self-knowing.  When we love, we love with our hearts, there is no aloofness we fall head over heels.  We aren't clever or witty about pain, we are consumed by it.  Characters in many modern movies don't reflect who we are as real people, they reflect who we wish we were in our daydreams. Everybody wants to be Fonzie . . . but nobody is Fonzie.  Fonzie isn't even Fonzie; he is probably just a depressed guy who tries to fill the emptiness with random women.  That's one of the great ironies of The Artist, while at first glance it may seem almost corny with it's pure emotion, it actually delivers a more honest view of how it feels to go through joy, love and anger.  The brilliance of the movie isn't the homages or the honest emotional delivery though.

We are living in a time with massive unemployment where millions are out of work and can't find a new jobs.  They don't have the right skills or the right education for the modern workforce.  American workers are becoming more and more productive, but many people in "traditional" industries are having their jobs shipped overseas and finding that their skills of the past are just that of the past.  Manufacturing plants are closing, newspapers are disappearing and it's becoming harder and harder to become part of the middle class without advanced degrees.  At first glance many would look at a movie like The Artist and think,"There is a nice movie about an interesting time in history."  After all, how can a film about a silent film star who can't make the transition to "Talkies" have any kind of resonance in the Internet age?  The answer is because movies don't live in a bubble.

The march of the future passing someone by is not a unique experience of the a silent film star 80 years ago, but a constant and natural part of all lives.  Technology and culture are expanding at a rate that makes it not only difficult to remain relevant, but futile.  Time waits for no man, life eventually passes us all by.  Whether it's because you no longer have the skills to be competitive in a new workforce, the realization that you can't lace up your cleats for one last game or simply wondering why teenagers love some new music that you simply don't understand.  Time keeps moving, technology keeps advancing and as they do we are all left in the wake.  Many people's natural and unfortunate reaction to their loss of relevancy is bitterness and anger.  The anger is directed at those that "left" them behind, those that champion change and anger at those whom they feel no longer appreciate their skills and individual value.  They feel like feel like an artist without an audience.

This is the great brilliance of the artist as a film. It has meaning in modern times not in spite of it's historical style but by reveling in times gone past.  This movie is a hoot and a fantastic celebration of an entire style of art that is almost forgotten, but  it is an important movie today is because it makes us consider who we are now, in relation to who we used to be.  As a society we are often preoccupied solely with what is next, but we can't ignore the past.  We mustn't pretend that yesterday didn't happen or even worse that it did but it wasn't important and has nothing to teach us about today.

The artist is a movie about an artist with no voice, or maybe more accurately, about an artist who doesn't feel that he's lost his voice but that his audiences no longer listening to him.  He is a man who has been left behind, like so many before him and since.  We live in a world so full of advancing technology, changing trends, electronic noise and constant change that we all know what it feels like to be not heard and left behind.  The artist reminds us not only do others feel the same way but that they always have, but in spite of it all there is still reason to smile, laugh and love.  And if you really want to be happy, just dance with the girl you love!