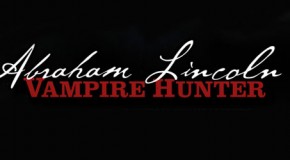 Okay, so here is the trailer for Abraham Lincoln Vampire Hunter . . . I'm not really sure what to say right now . . .I'm not often left speechless but I have to admit I have no idea what to make of this movie.


The trailer looks visually pleasing but we are talking about Timur Bekmambetov the director of Nightwatch, Daywatch and Wanted; so it's a given anything that he makes is going to be easy on the eyes.  My confusion at this project never had anything to do with the competency of the director, but rather my inability to understand how and why this movie exists.  Don't get me wrong I love campy, low-budget horror flicks as much as the next guy but that isn't what this movie seems to be.


When I hear the premise of a movie is that Abraham Lincoln's mother is killed by vampires and so he devotes his life to hunting the creatures down I expect a modest budgeted movie maybe starring Bruce Campbell if they can swing that big a name.  Instead what we seem to be on our hands is a $100 million action film that takes itself seriously(well as seriously as a movie about hunting vampires can take itself).  All I can seem to think is, "Huh?!"  After hearing initial reports about this project I was left scratching my head, after seeing some production stills and movies posters I was perplexed, and now we have a full-length trailer and I can finally say… sorry I got nothing.


I don't know if this is a work of genius and will be the greatest vampire movie ever made or the most hilariously awful or maybe just something incredibly boring, mediocre and unnecessary.  I really don't know what to say other than here is the trailer, watch it and let me know if you are as perplexed as I am.  Leave a comment below with your thoughts, maybe we can all support each other through these confusing times.