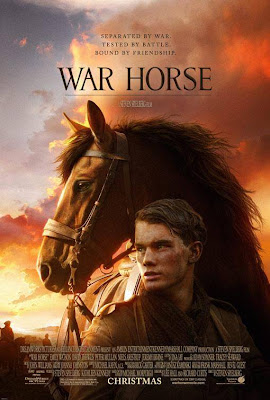 Sometimes, we have preconceived notions about a movie before we see it.  Before sitting down to watch War Horse I had been wondering why a film-maker of Steven Spielberg's talent would spend his time making a movie about a boy and his horse.  If I'm honest, the thought of a movie about a horse trying to find his way home during World War I didn't excite me.  I thought, "great, we are going to get Black Beauty meets Homeward Bound with some nice historical set design," not exactly the kind of movie I would be counting down the day to see.  A funny thing can happen to those preconceived ideas when you do finally sit down in the theater, sometimes you realize how wrong you were!  Not only do I love the film itself, but I can now see exactly why Steven Spielberg would spend his time making this movie.  War Horse is not only a great movie, but it fits in and compliments the rest of Spielberg's filmography perfectly.

Here is the most important thing I didn't realize about War Horse before seeing the movie is that this isn't a movie about a horse.  Don't get me wrong Joey, the horse of the movie's title, is certainly the central character in the film.  His journey is definitely what propels the movie forward, but the reason this movie works so well(and fits in so perfectly with the rest of Spielberg's filmography) is because this is the the World War I film Spielberg always wanted to make . . . or maybe even all of the WWI movies Spielberg has ever wanted to make.


Let me explain, even though this movie is superficially about a horse trying to find his way home, it is actually using the horse as a vehicle to see multiple perspectives and stories surrounding WWI.  The movie is anthological  in nature, more a collection of short films all connected by the inclusion of the War Horse on his journey rather than a classic three act structure about one character's journey.  In the words of Mary Poppins, the Horse is the sugar that helps the medicine(multiple experiences of WWI) go down.

Even as we sit watching the film we believe that it is Joey's journey that we are invested in, but it is the characters we meet along the way that have the deepest impact and we will remember long after the credits have rolled.  Through the Horse we are able to meet a young cavalry officer who must come to terms with what it means to no longer play at war but to enter a battlefield with the intent to kill or the teenagers fighting for Germany who made a promise to their mother before leaving for the Front or the young french girl who lives within earshot of the constant shelling of the battlefield with her grandfather.  Each of these stories and characters (and even more we haven't even touched upon) could easily support their own film. Spielberg's movie isn't about cramming in as much as possible though, it is through the connective tissue of War Horse they actually gain complexity and resonance; by being placed in context against each other we start to develop a macro sense of the war through our intimacy with very small individual stories layered on top of one another.

Even though alot of credit has to be given for the deft handling of the horse and how he is given a personality and a story arc, the real triumph is how nearly everyone who appears on screen and given even a line of dialogue is a wholly realized character.  Some parts in this film may have only 2 or 3 lines, but through superb acting and brilliant direction we completely understand who these people are.  Whether it is the landlord's lusting for his tenant's wife, the cavalry officer who seems too concerned with his hat or the two soldiers who have a chat in "no man's land", we understand these characters and the many more like them and begin to see the war not as a singular experience but rather one great tragedy that must be endured by all in their own way.  These characters in any other film would be little more than extras, but in War Horse they wholly realized people with there own desires, fears, motivations and stories to be told.   As far as I am concerned there are no "main" charachters in this film, there are simply some that we spend a bit more time with than others.

That is the brilliance of War Horse.  The movie insn't about a particualr part of WWI, but the entirity of it.  It is as much about those left on the homefront as those fighting in the trenches and the civiliansn caught in between.  It about how a World War effects everyone.  Each person in this film must decide how they will respond to the bleakness of a World War in their own way.  The hope and triumph of the film is that so many choose to react with hope, kindness and courage in their small ways in the face of devastation.  There is a brilliant monologue delivered by the french grandfather about a carrier pigeon(that I wont ruin here)but I feel sums up the themes of this movie perfectly.  Courage takes on many forms.

With War Horse, Steven Spielberg once agian shows that he can imbue a film with as much genuine heart as anyone working today, even when making a historical epic as grand as you can imagine.  The movie deals with the entirety of the human experience during WWI, and yet it nevers gets too big or cumberson.  Steven Spielberg is able to keep the movie grounded and personal.  I said at the outset that at first I couldn't understand why Spielberg would want to make a movie about a boy and a horse.  Now I see that by making so many small stories of WWI woven together into one great tapestry of a film, he has made all the WWI movies he has ever wanted or would need to make.  We sometimes take our great artists for granted.  War Horse reminded me how blessed we are to be able to witness a director so in command of his gifts.  I for one can't wait to see what he does next!
Posted by Nickel-Eye at 2:57 PM