Spielberg close to a deal for Moses film! 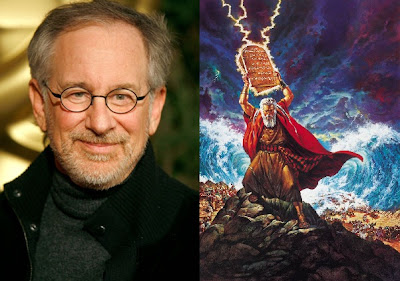 Deadline is reporting that Warner Brothers and Steven Spielberg are close to reaching a deal for him to direct a a new film centering on Moses.  With the working title, Gods and Kings, the project is described as being a "Braveheart-ish version of the Moses story".  They are looking to try and play up his hero's journey, “Him coming down the river, being adopted, leaving his home, forming an army, and getting the Ten Commandments.”  Apparently, what they are looking for Spielberg to bring to the film is his "gritty, reality-based" battle style from Saving Private Ryan.  According to the sources, WB has already decided that the film will not be in 3-D and they don't want a traditional historical epic in the mold of Cecil B Demille.  That sounds great and all, but it seems to me that when you hire Steven Spielberg to direct your film he decides the type of film he'll be making, not you.

I have to say, no matter what approach he brings to the movie, it certainly feels like a natural fit of subject and director.  I admit I'm not sure how I feel about this "gritty" approach, but after my recent experience with War Horse I will certainly be reserving judgement.  In the mean-time we still have Spielberg's next two films Lincoln and Robopocolypse to look forward to.

So what do you make of a potential Spielberg-helmed Moses epic? Does this sound like a movie he was destined to make?  Or do you see it as just another remake?  If he does sign on what kind of movie would you like to see?  Any thoughts on casting?  Let me know in the comments below!
Posted by Nickel-Eye at 11:42 PM