X-Men: First Class sequel will add only one new character! 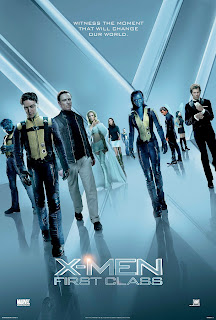 The release of Matthew Vaughn's X-Men: First Class is still over a week away, and already the early critical buzz is deafening.  I can't say that I'm surprised, because I have absolute faith in Matthew Vaughn.  Layer Cake was a heck of a movie, but Vaughn won a lifetime fan in me with his adaption of Stardust.  This guy has made nothing but great movies.  I have been looking forward to his take on a period X-Men film for quite some time.  It should come as no surprise that when discussing  a movie with such positive buzz, and the fact that Fox can't go more than a couple of years without making an X-Men film lest they lose the property, that talk has already turned to the possibility of a sequel.

For those that curious about what the future of the franchise will hold, or worried about the potential missteps it could take, Matthew Vaughn is way ahead of you.  In an exclusive interview with MovieWeb  he says of future sequels:


"We will only have one more new character. I won't say who he...I won't say who he or she is! But we will only be bringing one more new character in. Because . . . Magneto needs to have a nemesis he can fight with. Someone that will be his equal. I know who it is. It would be nice if I could say something, but I can't, mate!"
After our experiences with the previous X-Men movies this sounds incredibly smart.  There are alot of problems with the previous X-Men films, but one of the most inexcusable is the seemingly endless and sometimes pointless parade of mutants we are subjected to.  Whether the new mutants were fan favorites, or completely new and lame creations, they seemed to do nothing but muddy the waters.  An X-Men film should first and foremost be about a team and that team's dynamic.  Unfortunately the previous films felt more like the collected stories of dozens of random characters that may or may not related to one another.  It sometimes came off as a soap opera in it's structure, no clear through line as each mutant played out their own individual story.  If Vaughn already is aware of this potential "disease of more" then it simply reinforces my faith in him.  I can't wait to see what he delivers next week!

The only question now is who is this new character?  Only time will tell; in the meantime let the speculation begin!