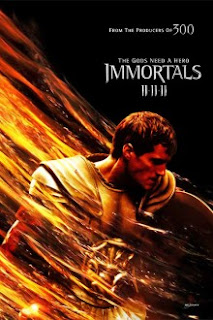 Let's get something straight right off the bat, Tarsem Singh's Immortals is a movie worth getting excited about.  Everywhere I look online there seems to be nothing but negativity about this movie.  People are saying it looks like 300 or cheesy or it is a glorified screen-saver.  I'm sorry but I don't believe that for a second.

Unless I am shown otherwise every Tarsem(The Cell, The Fall) film is a must see theater experience.  As far as I am concerned, he is one of the most important film-makers working today. Say what you will about the effectiveness of The Cell as a whole, but Tarsem took a pedestrian script and gave it a visual splendor and mystery that demanded the film be seen at least once.  The Fall is what truly cemented Tarsem as an important artist though.  The Fall is easily one of the best few films to be released in the last decade; from the performance he pulls out of a novice little girl to his examination of the nature of story telling and imagination to the gorgeous original images he creates, there is no film like The Fall.  Werner Herzog has said he feels it is his duty as a film-maker to give civilization images that it has never seen before.  I don't think there is a director alive who is as capable of fulfilling that pledge as Tarsem Signh.

So drink in the beauty of the first trailer for Immortals, block out the negative buzz and have your ticket ready to go on 11/11/11. Or at least let me know what you think below.