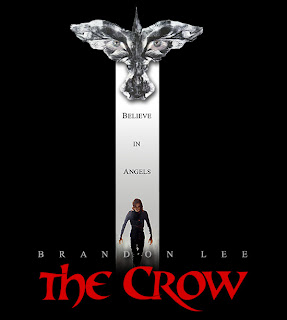 I don't get it, I really don't . . .is there anyone who thinks that a remake(I'm sorry "re-boot") of The Crow is either necessary or a good idea? Aside from a desire for money by the film-makers what possible reason is there for this film?  I am usually pretty forgiving of properties being given another go; I always feel that there is the potential for something new being brought to the table or simply an improvement over the original.  There is no such missed opportunity with The Crow as far as I am concerned.

I think Alex Proyas's(Dark City, Knowing) film is damn near perfect.  Not only do I consider it one of the five best comic book films of all time, but I also think it is a rare example of a film improving on it's source material.  Don't believe me?  Go reread the James O'Barr comics without Proyas's imagery and tone in your head.  So who will be filling the shoes of a Director who has given us three of the best genre films of the last 20 yrs?  Journeyman film-maker Juan Carlos Fresnadillo(Intacto, 28 Weeks Later) working off a screenplay from Stephen Norrington(Blade) who mishandled The League of Extraordinary Gentlemen so memorably.

As bleak as the news of the director and writer sounds none of it made my heart sink quite so fast as the rumor circulating in the last 24hrs that Bradley Cooper(The Hangover, The A-Team) may step into the titular role.  Don't get me wrong, I enjoy Cooper and think he could definitely pull off a comic hero some day, but this is not the project for him.  There is nothing about Bradley Cooper that makes me feel like he is a proper fit for this character.  Should he have been cast as Green Lantern? Absolutely!  Does that mean he should be cast as The Crow? Absolutely not!

I know that the original film will always be there, but I can't remember the last time I hoped so strongly that a film would fall apart in pre-production.  I want to hear from you guys, am I overreacting here or this truly one of the worst ideas you have heard all year?  Let me know in the comments below!
Posted by Nickel-Eye at 1:47 PM