Confirming what we had already learned from Joss Whedon's twitter over the weekend, filming has officially begun on The Avengers.  For those living under a rock, The Avengers tells the story of Earth's mightiest heroes joining forces to save the planet.  What or whom they will be saving the planet from has been the number one question up to this point.

We may be given a clue(or another red herring) about whom that villain may be, as the press release put out by Marvel today is the first confirmation Loki will appear in the movie.  But, since the movie is already packed to the gills with the likes of Iron Man(Robert Downey Jr), Nick Fury(Samuel L Jackson), Black Widow(Scarlett Johansson), Hawkeye(Jeremy Renner), Thor(Chris Hemsworth), The Hulk(Mark Ruffalo) and Captain America(Chris Evans), it certainly wouldn't be surprising to learn that The Avengers may have to deal with more than one threat.

Now I know that some folks are worried that the sheer number of characters will ultimately be the downfall of this film, but that is why I was so heartened to see Whedon given the job.  In my opinion all you have to do is watch a few episodes of Firefly to see he is a master of juggling multiple strong personalities in a genre environment in a deeply satisfying way. Call me what you will, but if The Avengers ends up being as qaulity a film as Firefly was I will be over the moon.

So check out the first set photo from the movie(which is kinda iconic if you ask me) and click below to see the full press release.  So what do you guys think?  Is this reason to celebrate or will this be a disaster of epic proportions?  Let me know in the comments below. 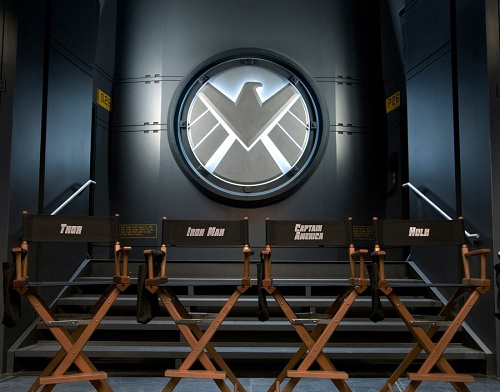 "Production has commenced today in Albuquerque, New Mexico on Marvel Studios' highly anticipated movie "Marvel's The Avengers," directed by Joss Whedon ("Serenity") from a screenplay by Whedon. The film will continue principal photography in Cleveland, Ohio and New York City. Robert Downey, Jr. ("Iron Man," "Iron Man 2") returns as the iconic Tony Stark/Iron Man along with Chris Hemsworth ("Thor") as Thor, Chris Evans ("Captain America: The First Avenger") as Captain America, Jeremy Renner ("Thor," "The Hurt Locker") as Hawkeye, Mark Ruffalo ("The Kids Are Alright") as Hulk, Scarlett Johansson ("Iron Man 2") as Black Widow, Clark Gregg ("Iron Man," "Thor") as Agent Phil Coulson, and Samuel L. Jackson ("Iron Man," "Iron Man 2") as Nick Fury. Set for release in the US on May 4, 2012, "Marvel's The Avengers" is the first feature to be fully owned, marketed and distributed by Disney, which acquired Marvel in 2009.

Continuing the epic big-screen adventures started in "Iron Man," "The Incredible Hulk," "Iron Man 2," "Thor," and "Captain America: The First Avenger," "Marvel's The Avengers" is the super hero team up of a lifetime. When an unexpected enemy emerges that threatens global safety and security, Nick Fury, director of the international peacekeeping agency known as S.H.I.E.L.D., finds himself in need of a team to pull the world back from the brink of disaster.

Based on the ever-popular Marvel comic book series, first published in 1963, "Marvel's The Avengers" brings together the mightiest super hero characters as they all assemble together on screen for the first time. The star studded cast of super heroes will be joined by Cobie Smulders ("How I Met Your Mother) as Agent Maria Hill of S.H.I.E.L.D., as well as Tom Hiddleston ("Wallander") and Stellan Skarsgård ("Angels & Demons," "Mamma Mia!") who will both reprise their respective roles as Loki and Professor Erik Selvig from the upcoming Marvel Studios' feature "Thor."

Marvel Studios most recently produced "Iron Man 2" which was released in theatres on May 7, 2010. The sequel to "Iron Man," starring Robert Downey, Jr. and Gwyneth Paltrow as well as Don Cheadle, Scarlett Johansson and Mickey Rourke, took the number one spot its first weekend with a domestic box office gross of $128.1 million. To date the film has earned over $620 million in worldwide box office receipts.
In the summer of 2008, Marvel produced the summer blockbuster movies, "Iron Man" and "The Incredible Hulk." "Iron Man," in which Robert Downey, Jr. originally dons the super hero's powerful armor alongside co-stars Terrence Howard, Jeff Bridges and Gwyneth Paltrow, was released May 2, 2008 and was an immediate box office success. Garnering the number one position for two weeks in a row, the film brought in over $100 million its opening weekend and grossed over $571 million worldwide. On June 13, 2008, Marvel released "The Incredible Hulk" marking its second number one opener of that summer. The spectacular revival of the iconic green goliath grossed over $250 million in worldwide box office receipts."
Posted by Nickel-Eye at 2:18 PM