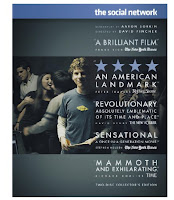 Note: I am a huge fan of trailers.  There is something fantastic about how the great ones can cause an emotional response, give you an indication of the content of a feature film and intrigue you enough to want to see the film; all in less than three minutes.  It is always interesting to look back at trailers and see how a film was being sold, remember the film itself or just to be reminded of days gone by.  Every Tuesday I will share a different trailer that I feel really stands out in one way or another.

This week's trailer is far and away the most recent to be featured in this column, but I'm sorry I simply cannot get enough of The Social Network.  I've seen this movie twice in theatres(once followed by a live Q&A with Aaron Sorkin, Armie Hammer and Jesse Eisenberg), written about it, bought the soundtrack, seen this trailer easily twenty times in the past year and it still has not lost an ounce of it sheen.  The Social Network is a brilliant work of art that deserves any accolades which may be heaped on it this weekend. Even aside from the film itself though, this is one of the best trailers ever made.  I still have a physical emotional reaction to it.

If there were an Academy Award for best trailer this would win hands down.  From the haunting boy's choir cover version of Radiohead's "Creep", the perfect use of anonymous Facebook pictures, Fincher's beautiful images to the perfectly succinct words of Aaron Sorkin, this trailer comes together in such a beautiful and natural way that you can't imagine this film being encapsulated in any other, let alone better way.  Let me know what you guys think, is this trailer as perfect as I think it is or am I just off my rocker?  And, if you can't get enough of this movie like me, make sure you check out the chance to win a copy of the movie for free just by filling out an Oscar ballot.