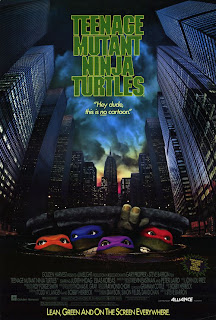 Note: I am a huge fan of trailers.  There is something fantastic about how the truly great ones can cause an emotional response, give you an indication of the content of a feature film and intrigue you enough to want to see the film; all in less than three minutes.  It is always interesting to look back at trailers and see how a film was being sold, remember the film itself or just to be reminded of days gone by.  I have decided that every Tuesday I will share a different trailer that I feel really stands out in one way or another.

I may be alone on this one, and my mind may be needlessly clouded by nostalgia, but the 1990 live action film Teenage Mutant Ninja Turtles is a great movie.  Don’t get me wrong, I can’t sit here with a straight face and argue that it is a film of particular artistic merit, imagination or originality.  It was however the perfect movie for my ten year old self.  It wasn’t simply that TMNT was the absolute coolest thing to any boy growing up in the late 80’s and early 90’s, but that the film seemed to be such a grown-up version of our beloved heroes at the time.  The thing that I find enduring about this movie and trailer is how perfectly it seems to toe the line of gritty, mysterious and genuinely dangerous while never losing sight of the fact that this is movie made for kids.  The first half of this trailer is what I really love; the whole country (under the age of twelve) had been waiting with bated breath for our first glimpse of the Turtles but it takes it’s time to really build the reveal.  It’s easy to say that all the stuff I’m citing as great was more or less lifted straight from Tim Burton’s 1989 Batman.  If you did say that you’d probably be right, but cool is cool whether it is terribly original or not.  Besides, no one can argue that the Turtle costumes from Jim Henson’s workshop aren’t still beautiful.  Let me know below, does the trailer take you back to the good old days too?  Or are you just shaking your head at what kids used to find cool?