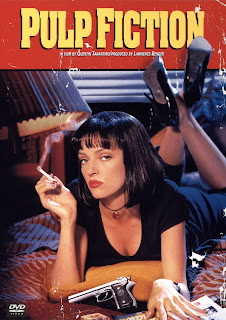 Note: I am a huge fan of trailers.  There is something fantastic about how the truly great ones can cause an emotional response, give you an indication of the content of a feature film and intrigue you enough to want to see the film; all in less than three minutes.  It is always interesting to look back at trailers and see how a film was being sold, remember the film itself or just to be reminded of days gone by.  I have decided that every Tuesday I will share a different trailer that I feel really stands out in one way or another.
Can you believe that it has been almost 15 years since the release of Pulp Fiction?  It’s amazing the impact the right film at the right time can have.  Quentin Tarrantino’s second feature film was a complete game changer for Hollywood, with its influence still being felt today.  Sure Pulp Fiction took a washed up star in John Travolta and a character actor in Samuel L Jackson and turned them both into superstars, but the real impact came from the film itself.  The movie made mainstream audiences comfortable with non-linear storytelling, was as quotable as any film in history, and perhaps most importantly brought genre film-making out of the slum.  Pulp Fiction embraced genre film in a way that wasn’t style over substance; but rather elevated the style to such dizzying heights, that the style was the substance.  The trailer shows us images that are instantly recognizable (even before seeing the movie) yet they are given an immediacy, polish and rhythm that creates something unlike anything we have ever seen.  That is the genius of Pulp Fiction, it seems to be both cutting edge and completely familiar no matter what decade you are watching it in.  The Pulp Fiction trailer isn’t a polite commercial asking you to see a film; it is a sledge hammer to the skull letting the world know it won’t be the same once Quentin Tarrantino is through with them.  So check out the trailer below and tell me that when that music starts pumping it doesn’t hit you like an adrenaline needle to the heart.
Posted by Nickel-Eye at 5:55 PM