Never Let Me Go is one of the best movies of the year! 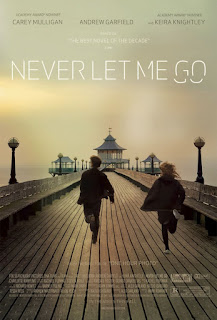 Never Let Me Go is one of the best movies of the year; unfortunately no one seems to be talking about it.  This is a film that deserves to be seen, discussed and loved; but instead is simply being ignored.  I have to admit that this was one of those films that I had no expectations for going in, and came out completely blown away.  All I knew of the movie before watching it other than the cast and director was a description of it as a “sort of period sci-fi film”.  What I got was a haunting film that has demanded considered thought and discussion from every person that I’ve met who’s seen it.  Mark Romanek (One Hour Photo) has created a film that questions the very nature of the human soul.  Don’t let the sci-fi tag fool or dissuade you, this isn’t a movie about technology but rather of ideas and ethics.
One of the things I love so much about this film is that it has such a limited viewpoint.  We see this world only from the perspective of our protagonists and as a result we, the audience, begin to feel just as helpless as the characters we are watching.  Never Let Me Go is a movie that is emotionally raw, it contains scenes that range from touching to disturbing, but never contrived.  The fantastic young cast of Andrew Garfield (Social Network), Keira Knightly (Pirates of the Caribbean, Pride and Prejudice) and Carey Mulligan (An Education) give performances that allow us to appreciate humanity in some of its most basic forms.  A friend of mine who had seen the movie commented that, “every person who I talk to about the movie cites a different scene . . . they all respond to something different.”
I know to some of you my descriptions may be frustratingly vague.  The reason I hesitate to write more is because the power of this film isn’t derived from the story being told, but rather the emotional journey that can only be experienced by watching the film.  In my opinion the less you know about the movie before you see it, the more effective it will be for you.  Never Let Me Go is a brilliant film that deserves an audience and you owe it to yourself to experience this important film in theaters.  If you still need more information click here to see the trailer (which I don’t recommend doing before you see the film).  Or, if you are ready to see one of the best movies of the year click here to find show times in your area.
Posted by Nickel-Eye at 10:59 AM