The first image of Karl Urban (Star Trek, The Chronicles of Riddick) as Judge Dredd is available . . . and he looks like Judge Dredd.  I have to admit that I am not terribly excited about a reboot of this franchise.  Despite my love for tales of distopian future, I never cared for the comic or the 1995 Sylvester Stallone film.  The studio is saying that this version, titled Dredd, will be more faithful to the comics, using the fact that we will never see Dredd's face as an example.  The pic is courtesy of a concept artist working on the film named Jock.  So are you excited for this 3D actioner from Director Pete Travis (Vantage Point), or are you feeling kinda "meh" like me? 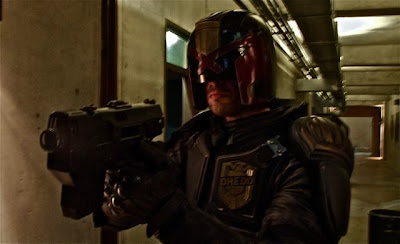