No 3D for Harry Potter 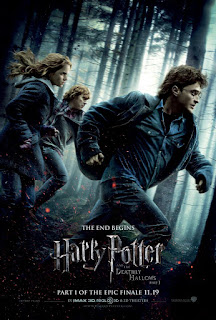 Warner Brothers released a statement today saying that Harry Potter and the Deathly Hallows Part 1 will not be released in 3D.  According to the statement the decision was made because they were, “unable to convert the film in its entirety and meet the highest standards of quality” with the 3D conversion process.  I’m not one of these people that are just adamantly anti-3D, but I hate the post production hack jobs that have been pushed down our thoughts on nearly every major release.
Did the 3D work in Avatar and did that movie break every box office record? Yes, but that was a film that was actually shot in 3D and James Cameron isn’t exactly a stranger to big box office to begin with.  If a film is conceived in and shot with 3D cameras I say more power to them.  I think we have all had more than enough of the dark, murky experiences that the post conversion process has already caused though (looking at you Clash of the Titans and Alice in Wonderland).  Maybe the studios learned from The Last Airbender, Piranha 3D and Resident Evil: Afterlife (which is the second movie to shoot using Avatar’s cameras) that 3D doesn’t necessarily equal box-office gold.  Or, maybe WB just realized Harry Potter is going to rake in the cash regardless.  Even so it’s nice to see a studio stand up and do the right thing to get the best quality product to the audience.

PS Guys, I need a little input, I am kinda late to the whole Harry Potter party and I'm not sure how to proceed.  Up until about six months ago I had only seen the films and hadn't even looked at the books, but my girlfriend convinced me to go back and give them a shot.  In that time I have read through a few of them and I have to say I've enjoyed them.  My question is should I keep going and read Deathly Hallows or wait until I have seen the films.  I appreciate your advice.
Posted by Nickel-Eye at 7:48 PM