The Dark Knight Rises without The Riddler! 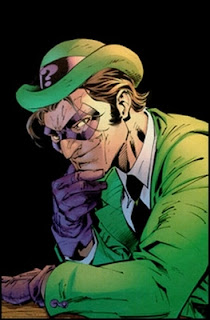 The title for the new Batman film has been revealed to be The Dark Knight Rises.  We also finally have it from Christopher Nolan himself that The Riddler will not be the villain in the new film.  This raises a lot of questions about the direction the film will take.
Some are theorizing that it could mean the return of Harvey Dent/Two-Face.  This is based off a quote that Nolan made about “The Dark Knight” referring as much to Harvey Dent as Batman in the last movie.  While I would welcome the return of Aaron Eckhart as Two-Face this would seem at odds with what Nolan said after the release of the last film; that he was dead and gone not to return.  I thought that was strange because upon my first viewing I got the distinct impression that they very purposely never showed his body.  In fact, until I read the quote weeks later, that Nolan said he was dead, I assumed that Two-Face had been locked up in Arkham and forgotten, while Dent was given a hero’s funeral and Batman went on the run.  To me that strengthened the idea of giving the public the white knight they needed whether it was real or imagined especially after Gordon had already faked his death establishing a precedent.
Most of this is neither here nor there though as Nolan has shown in the past that he will change direction regardless of what he may have said in an interview in the past.  Case in point before Batman Begins came out he said the single biggest mistake the original set of films made was killing off the Joker in the first film.  Well, Nolan was true to his word and made sure the Joker survived, only to announce recently that The Joker will not appear in the next film.  Who knows where the next film will end up, but at least we now have a title and in the mean time it sure is fun to speculate.  So tell me, what do you guys think?
Posted by Nickel-Eye at 10:16 AM